Upon an inquisitive survey, which led to a dialogue concerning groups, an epiphany speculated in my cerebrum which shrouded me with much thought!

It can be verified that in all metrication and diversity, every single last person, postulates by affirmation into a multitude of areas, minorities, majorities, subdivisions, echelons, subminiatures, sections, hierarchies, affiliates, out casts, coadjuvancies, destitutes, divisions, personals etc etc etc etc….

It is appropriate to understand we all have multiple likes and dislikes, attitudes to separate things, these alone will always pit us against contrasting and collaborative postures to indifference and the multitude of diversity in existence!

As a mere example, let as shimmeringly contemplate the structure of the basic rock! Then pitch it against the back drop of stones! In which some idle folk may state that “The rock is either out of soughts amongst the stones and is of a different essence!”

“No” Quitely simply not true, for the rock is the sand, just as the star is the atmosphere!

The stone placed amongst a pit of sand may resume the same affirmation from appellants of bias fortitude and skewed data!

For identities are not always exact in every foreseeable structure, though they maybe the same!

The Rock, the Stone, The Sand after all are but the same substance in 3 separate stages of form! In the identical way people are alike by essence yet separated by form! It is a shame via agendas of grotesquely fierce greed, feed, need, impede, fear and the obstructions devised to control and separate the now deemed partisans! This unfortunate shame has been purchased wholeheartedly by the simpletons of the western and spread throughtout the north as their ultimate identity!

Yet they fail to realise the separation of identity is the ultimate faux pas and has no real substantial presence except for that which one pays heed to govern! 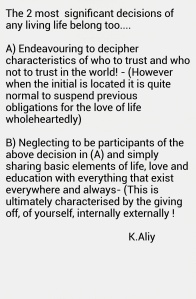 “The Mountain, The Hill, The Mount, The Rock, The Boulder, The Stone, The Pebble, The Sand, The Dust are all indeed remnants that lead continously in reciprocity back to the form of the mountain and dust again!**

All uniquely situated in their personal form yet added to make a larger substances and possible benevolence! It is a shame that human intelligence mimics this dividends in the state of major indifference and the lack of intelligence for poor understanding and realisations!

Confusion often arises where people talk, however as a consequence to others, do not actually know anything about that which they talk about, and evidently can lead millions astray even at times a whole generation!

The most diabolical assertion I have reoccurringly come into contact with, is assign to this statement and poorly advocated quote!

This statement by the legendary iconic philosophical astute, has falling by way of misinformation! As almost all have attributed the meaning to socrates stating he himself knows nothing of life!

That which the common parish of quotes and history fails to realise is the context, circumstances and reason by this poorly refreshed statement?

He who was forgoing torture treatment on his death bed by Athenian Greek soldiers was not acquaint to giving up details to the enemy in question! 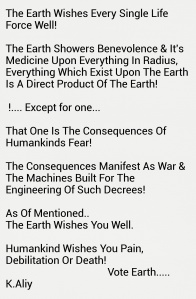 I have come to the realisation that everything ever said, is probably underpinned as a factual statement when in reality is a further skew upon the true statement itself!

If one affirms to realise this affirmation, you may also recall the systematic distortion of a truth, turned into a popular childs game named the “Chinese whisper”.

Often poor living standards from, the food you eat, to your groups of socialist can empty toxic waste to your own benevolence, which often adds further weight to increase issues one may have already encountered!

Thus preventing you from real elevation, realisation and actuality! By the time you realise you have been kept behind by mischievous souls who truly wish you unsuccessful benevolence in secret, it is often to late, where a capacity of misguidance has been inherited!

The momentum of such a task is to Ludwig the unsuspected to believe in a particular path!

Life, metamorphosis, consciousness are characteristics of every entity and force akin to the mountain to sand to mountain in perpetual fashion!

Every grain of sand has a value, yet it is attached to an even bigger value as sizeable object. Also this very size can be infinitely large or small. We could also suggest that the consciousness grows as the size multiplies! The consciousness dwindles as the greatness reduces diminishingly!

It is also my Cri De Couer, that we  humans, truly know nothingness, and have not come close to introduction on what may be deemed as the abstraction of life!

To get a feel of that which I mean, one would have to be prepared to extract their normal thinking away from formal establishments of institutionalisation and the effort of keen!

It is indeed true that people know nothing and have acquainted less about life- (not that socretes ever stated this to his torturous captors on his death bed in this realisation).

The matter of sophistication and entity is present from the microscopic to the ultramagnetic of the grand! Human emotion diverts consciousness and skews the natural sublimation of its attachments- (realisations) Thus by surrounding yourself with for a better word toxic matter and uneconomic objects- (dead weighted instruments, the idiot, pretentious objects, labels etc, materialism etc) we block, stall and lay severe ambiguity to all and every tinge of any echelons, that submerge us in the actuation of energetic ephoria and subliminal astute tutelage in the awakening of such zones!

The natural forest and its biotic habitat has endeavored to submerge in a superior subdivision of consciousness via existence- (2-4 billion years) and life the human species has not yet existed long enough to comprehend!

This level of consciousness is totally insurmountable from humanistic perspectives! For innate matter sides with no such nerve of the inferior motion! It has also been reported that mamals carry a higher level of consciousness! I am in total agreement with such a statement, as I see a superior level of control via many groups of ungulates and carnivorous predators alike! Including that of jealousy, greed, exploitation, systematic abuse, petty and fowl play, bias jurisdiction, prejudism and corruption!

For this eternally I place mamals as a higher form of species, emotionally and consciously!

Since humankind has lodged upon planet earth as a relunctant messiah, all its efforts has come to the destruction of the earth for greed and the deity of luxury!

In this essential assessment,  it is my believe that the majority of folk in the world are, without hope and will not succeed!

The number one culprit is fear, which controls all distortion and distribution of fear, dishonesty and the like!

You will find people are or appear much below themselves or the mindful, not via dress sense but rather by fear of stating their truths or worse joining coadjuvancies of convenience for fear of loneliness!

The question that warrants space is, who would want such spirits around their essence?

Fear subsequent leads to the biggest crimes across humanity ever known!

One can not seriously ever trust agents who fear so much?

What would our world be akin to if all of nature feared the way humankind feared!

Our plantation and biotic life would be totally poisonous and inhabitable! Even the light would not penetrate its shield of fear renouncing it un-photosynthesis in which life would not be bound by light thus would not grow!

Fortunately the echelon of consciousness adopted by all other life outside humankind is bound by a super heterodyne consciousness! A subliminal consciousness unrivalled by any effort juxtaposed by human efficiency in all width &  breath of metrication for all time possibly always!

If you understand this, you maybe earned to have done well! For it is not untill then you would have learnt to go your own way by your choice, not left out or forced by others!

That is the difference, the ultimate decision!***